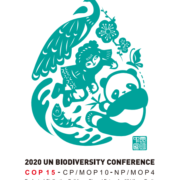 Starting this Wednesday, December 7th, Montreal will host the 15th Conference of the Parties (COP) of the United Nations until December 19th. This conference will focus on the Convention on Biological Diversity, which was first signed in 1992 at the Earth Summit in Rio de Janeiro. The signatory states of the United Nations Framework Convention on Climate Change will meet to set new targets for the preservation of biodiversity. One of the goals is the protection of 30% of the land and oceans by 2030. From conservation areas to the fight against invasive exotic species, many topics will be discussed during this important meeting. The program of events is available here.

For the occasion, Réseau Environnement will host a public area from December 9th to 14th at the Grand Quay of the Port of Montreal. Several activities will be open to the general public, such as conferences, to discuss possible solutions for a better management of biodiversity. A family zone will also be set up, offering activities for all ages! The program of events for the public zone is available here.